Saints Constantine and Helen, Equal to the Apostles 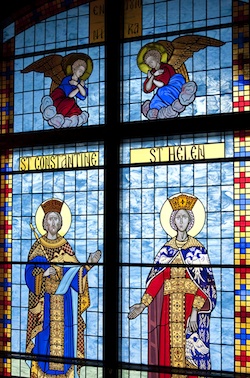 Saint Constantine was the renowned emperor of the Roman Empire, who signed the Edict of Milan in the year 313, which declared that the Empire would be neutral with regard to religious worship, and stop all persecution of Christianity. This was a decisive step that not only protected Christians, but prepared the way for the legal recognition of Christianity as the eventual religion of the Empire.

When St Constantine’s father died, he was proclaimed successor to Roman throne. Yet in 312, he faced the threat of an attack by Maxentius and Maximinus. As Constantine marched into Italy with his troops, he saw beneath the sun a radiant Cross with the words: "By this shall you conquer." The following night, Jesus Christ appeared to him in a dream and declared to him the power of the Cross. In the morning, he immediately ordered that a banner be made in the form of a cross, and he inscribed on it the Name of Jesus Christ.

The following day, Constantine defeated Maxentius and entered Rome in triumph as the Emperor of the West, while Licinius, his brother-in-law, ruled in the East. Licinius, however, began persecuting the Christians. Constantine fought and defeated him in 324, and thus became monarch over the West and the East.

Under the rule of Constantine, all persecutions against the Church ceased. After three centuries of suffering, Christianity triumphed through its witness of martyrdom and love, and proclamation of the Good News of Christ.

In 325, Saint Constantine gathered all the bishops of the Church for the First Ecumenical Council in Nicaea. This council helped defend the Faith against false teachings, holding firm the Church’s teaching on Christ’s Divinity.

In 324, Constantine laid the foundations of a new capital on the ruins of Byzantium, and named it after himself, Constantinople. Since the throne of the imperial rule was transferred from Rome, it was named New Rome, the inhabitants of its domain were called Romans, and it was considered the continuation of the Roman Empire. Right before his death in 337, Constantine was baptized and received the Holy Mysteries. He was 65, and had ruled for 31 years.

As for his holy mother Helen, during her son’s reign she traveled to Jerusalem and found the Holy Cross on which our Lord was crucified. In her zeal to glorify Christ, she erected churches at the sites of the Crucifixion and Resurrection, in Bethlehem at the cave where our Savior was born, on the Mount of Olives whence Jesus ascended into Heaven, and many others sights throughout the Holy Land.

She was proclaimed Empress, and two cities were named Helenopolis in Bithynia and in Palestine. She departed to the Lord at 80 year old in AD 330.

August 01, 2020
What does the future hold for us? The COVID 19 Pandemic continues and such uncertainty prevails in many aspects of our lives. Read more »

EXTREMIST OF LOVE AND JUSTICE

January 15, 2023
Acting as an extremist of love and of goodness. Yet how far have we in the Church fallen away from such “good” extremism? Read more »

The Church: Procedures for Becoming a Member of the Orthodox Christian Church